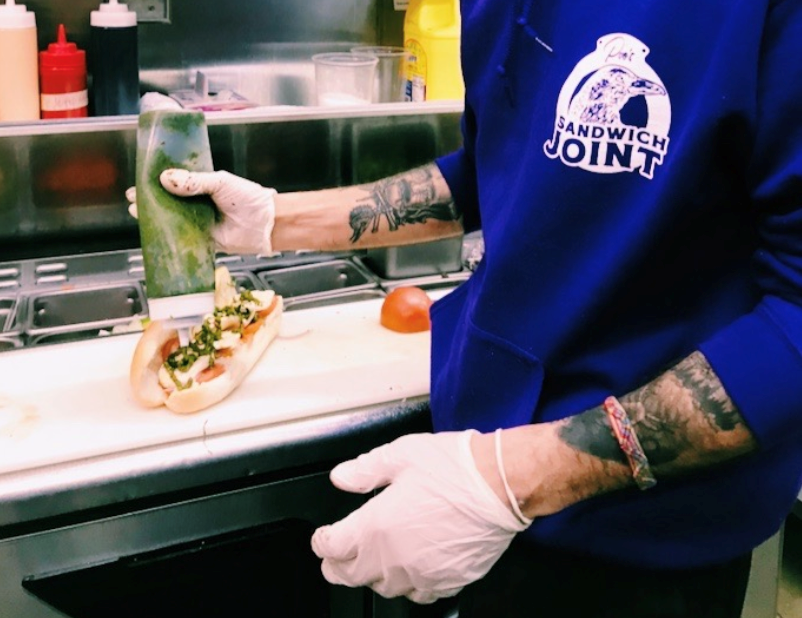 If you frequent Fishtown's area of Frankford Ave., you may have noticed a new window shop called "Poe's Sandwich Joint" ("Joint" in this scenario is a double-entendre--if you know, you know--but we'll get to that). Fortunately for me, I was able to make my way to its grand opening in early December, but for those of you who have yet to head over, I highly (no pun intended) recommend you do.

This joint's got a menu that Cheech and Chong's personal chef would have hand-crafted, and it's all coming to us from the kitchen with some serious brotherly love. The staff operates like a family, and they really know how to make you feel like you're more than just another sandwich-eater or french-fry-inhaler to them, and I think what truly set the precedent for the fast-and-familiar type of service is the man of the show, Poe. 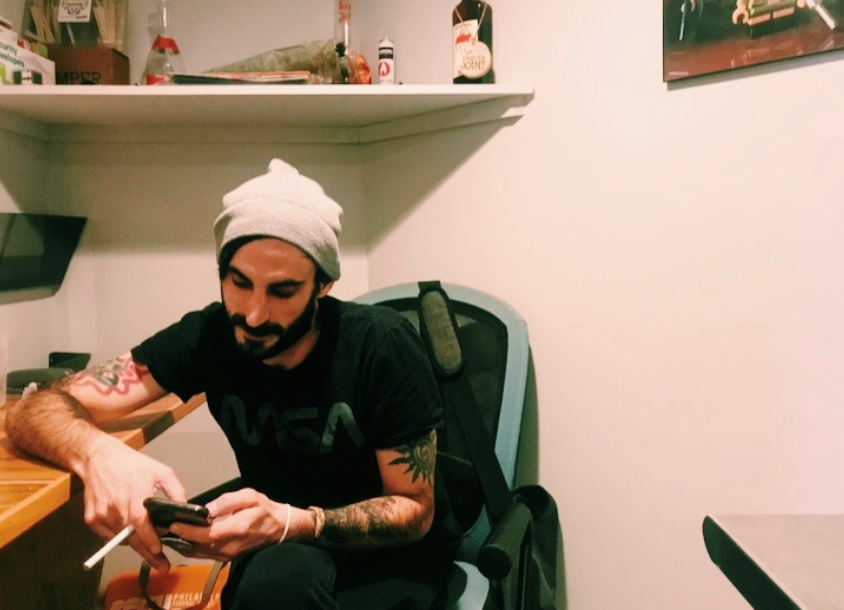 While Poe is not his God-given name, it does happen to be the moniker he went by while pursuing stand-up comedy, so no need for formalities here--we'll honor that to its fullest. And before you ask--yes, it is a tribute to the late Edgar Allan Poe, so again, yes, the bird on the menu is, in fact, a raven. 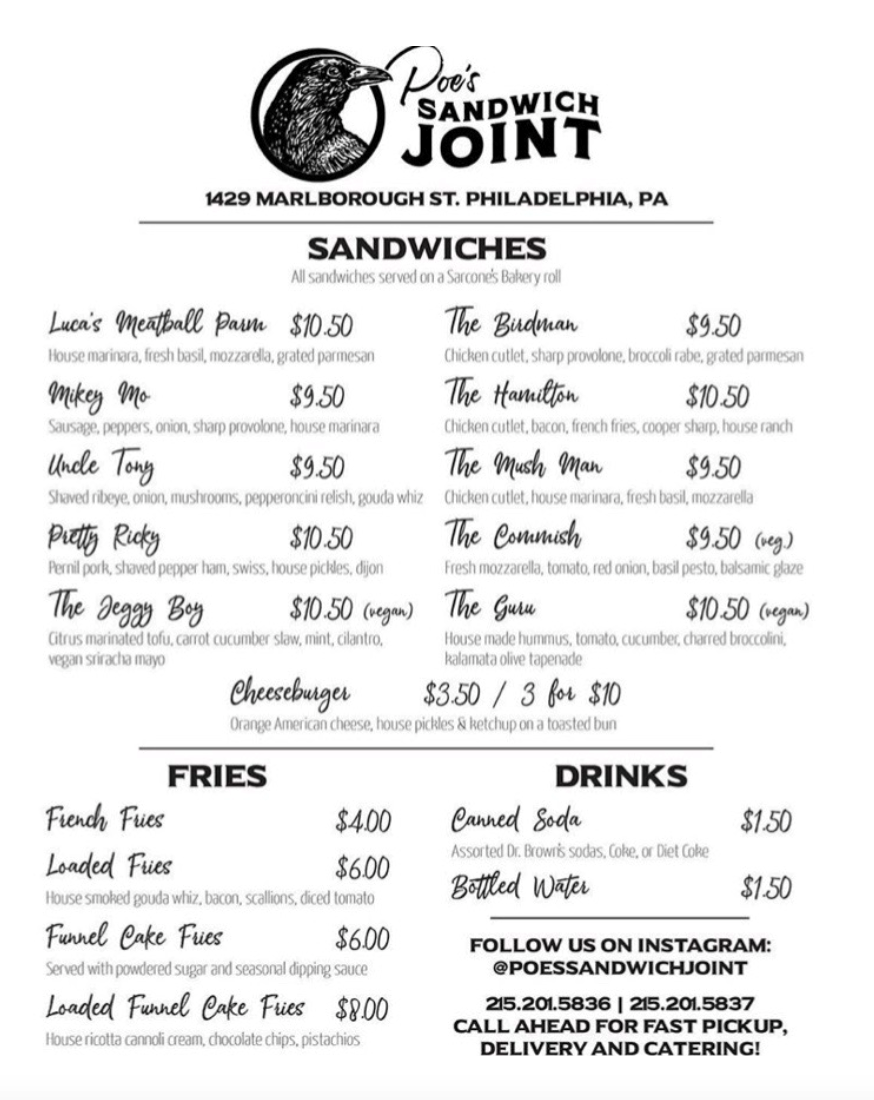 So who exactly is Poe, and why is he cooking up sandwiches in Fishtown right now anyway? Well... Poe's timeline goes a little something like this *deep breath*: doing all things comedy, occupying Wall Street for 50 days straight, protesting the anti-marijuana laws (including sparking up a doob at 4:20pm in front of the Liberty Bell with other protesters), becoming a weed-activist sensation seemingly over night, flying all over America smoking with the fun of the fun, hosting vibin' "weed parties," getting them shut down (pfft), and then finally, we've landed here on the corner of Frankford and Marlborough. (Great location, by the way. In the center of all the action. We can thank his friend for the hook up.) 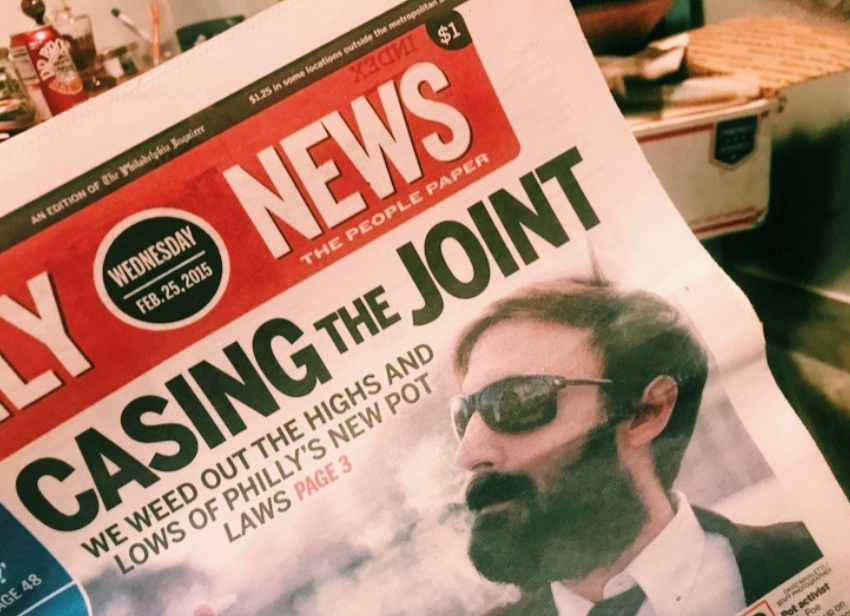 And that, my friends, is where this interview took place a few weeks after its grand opening. I definitely won't spare you the details because I need to paint you the most accurate picture (and because I like to ramble--who woulda thought?).

So Poe greets me at the door and welcomes me inside to get me out of the bitter cold, and fast. Immediate points in my book.

"You hungry?" Even if I wasn't, I would have said yes, because their sandwiches are hand-crafted with what I assume to be nectar from Heaven itself. He didn't tell me that--I just get that vibe, ya know?

Poe fixed me up a Commish, which is one of their vegetarian/vegan-friendly items on the menu, really was just asking about myself as I watched him whip everything up, grabbed me a Diet Coke (my choice), and led me downstairs to his lair of an office. 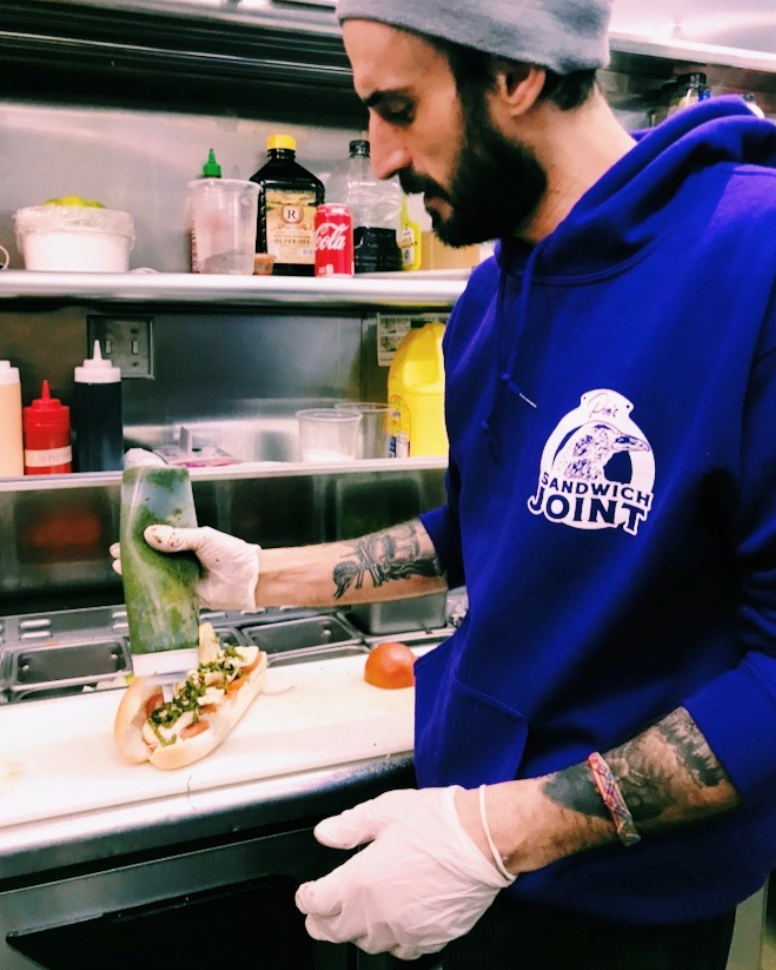 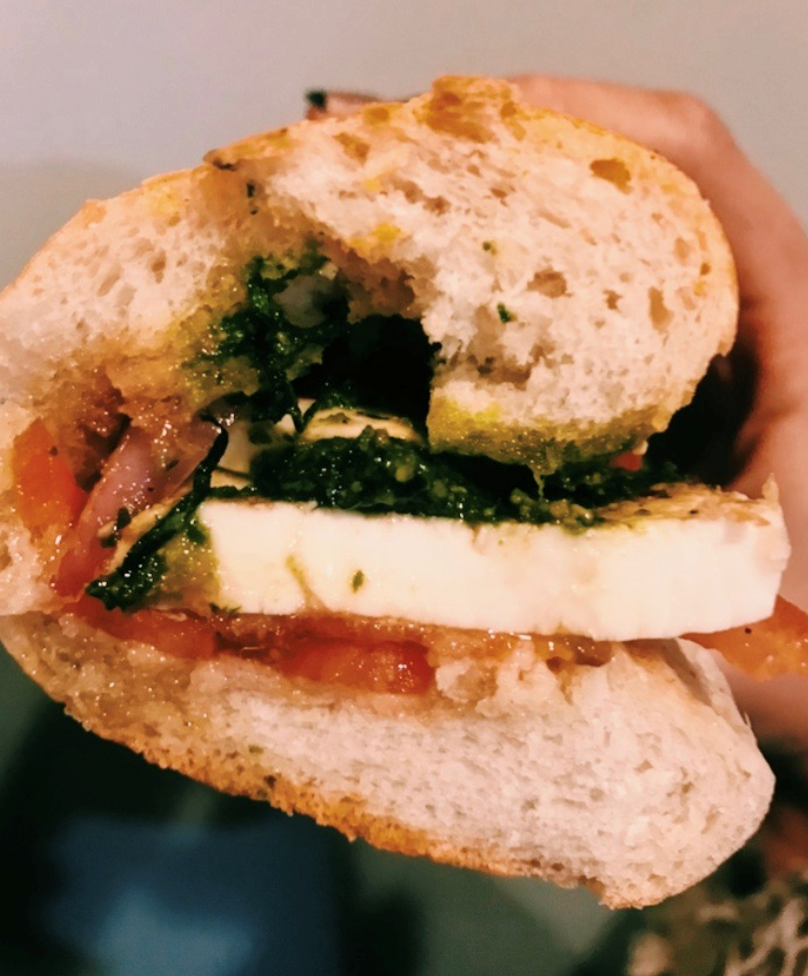 Now just picture me gnawing on this sandwich throughout the entire interview. Some people keep it "professional," in which case they might eat it with a fork and knife with a napkin bib. But Poe and I keep it real, so he handed me a clean hand towel to use as a napkin, I munched, and we chatted away.

So I came to learn that Poe partnered up with his buddy Mark (Three words: Culinary school. 80s. Legit.) and created this sandwich joint because, well, why not? He's big on living out different chapters to their fruition and then moving onto the next thing when the time is right. So with a cool ass girlfriend and a sweet baby boy to care for, this seemed to lay nicely into what would be his next page-turner.

With Poe and Mark showin' love to rolls and fries with twists on classics like chicken parmigiana for instance, Fishtown's getting a fresh punch to the face (in a good way). I mean, they're infiltrating the culinary scene and making normal foods feel new again. He called it a type of renaissance, and ya know what, I concur. Poe wants to bring real Philly to an area that's becoming more gentrified by the day, and for the record, neither Poe nor I think anything of the gentrification. In our eyes, bring on the tried-and-trues and bring on the transplants at the same time--everyone's gotta eat, and everyone's gotta read my blog (I'm kidding).

Nah, but that attitude is consistent to the vibes Poe puts out are all about bringing his inclusive nature to the public through a medium that everyone needs--some good f*ckin' food. Growing up in an Italian family from Philly, Poe learned from his family--most notably his mom--how to keep it real and show compassion. Nobody's better or worse than anyone else, and Poe tries to level the playing field as much as he can with his platform. 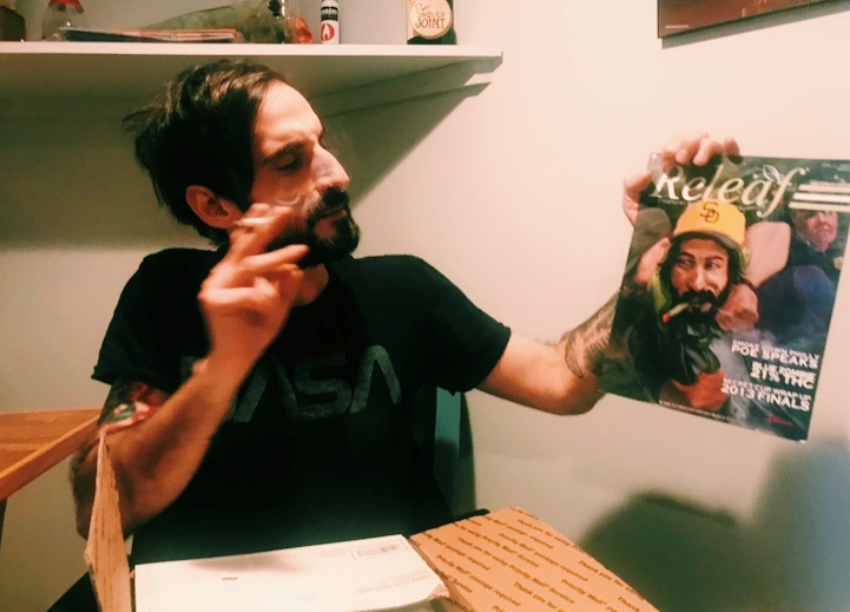 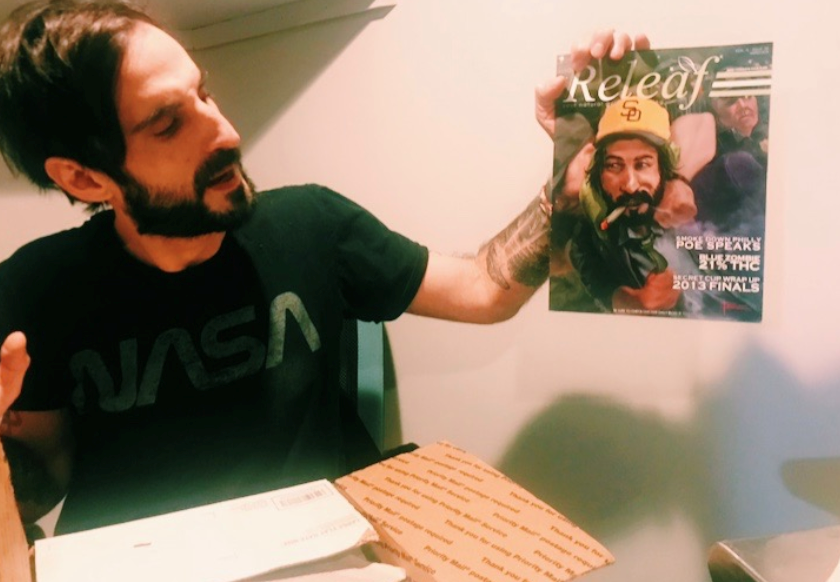 First the activism (even running for council), then providing a parties where people can let loose and be themselves, and now using his sandwich joint as a place to, yes, bring acceptability to the pro-marijuana community, but also to provide services to those financially less-fortunate by doing school bag and Christmas drives--and that's just so far. 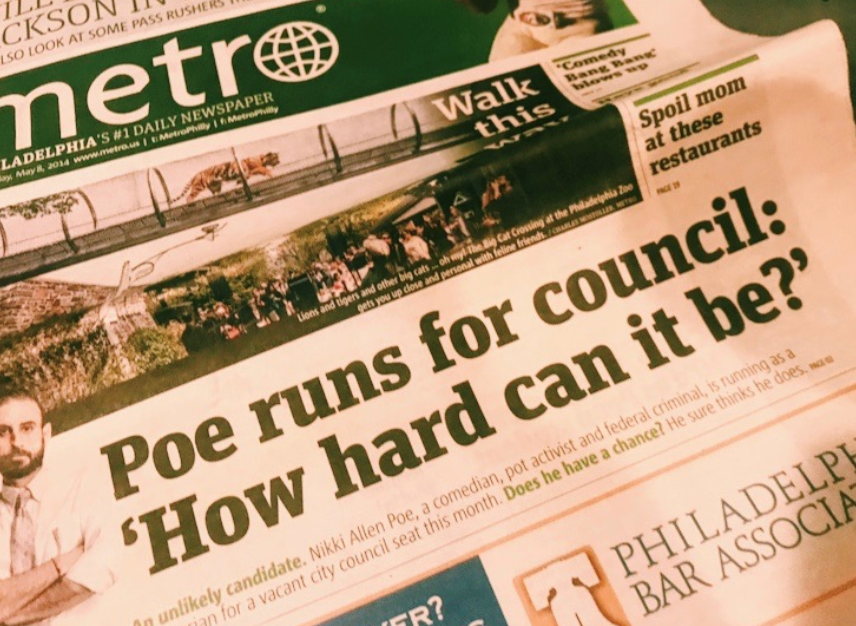 Like weed or don't, you can't deny a guy with a good heart and good food. Poe's got a lot to offer, and he does the best he can to show the area some grit while also graciously accepting Fishtown's warm welcome. Stop by until 3am when you're out on the town or have their delivery driver bring you somethin' fresh when you don't feel like heading outside.

You can stay up-to-date on the goings-on of the shop by following @poessandwichjoint on Instagram, and if you order food, make sure you take a picture of the goods and tag 'em. Poe really enjoys the inter-connectivity and potential of the whole social media realm, so yeah... he'll probably be reposting your stuff.

But if you just wanna join in on the fun in person (and/or really love the service), they've got two tip jars; but choose wisely, as together, they pose a preference question. YEP. So... Sativa or indica? Bong or bowl? And who knows what'll be next? (Guess we all gotta pay 'em a visit (or twelve) and weigh in.) 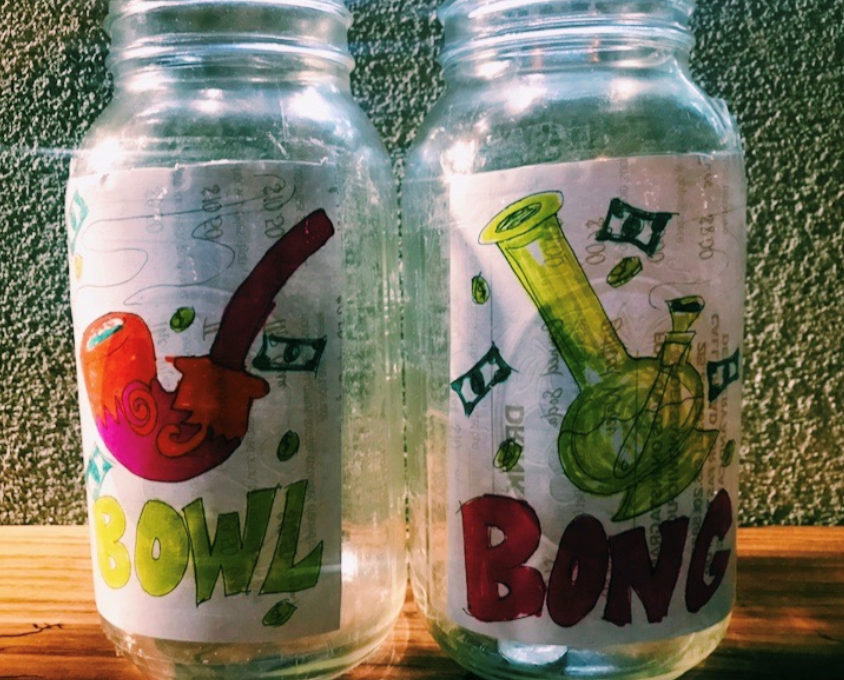 *exhale* Okay, so needless to say, this 2-hour long hang-and-interview sesh scored me some good insight for you guys, some bomb food (I got to make fries on my way out, actually. Now I'm a certifiable chef.), and last but not least, a new friend with more to offer the 'hood than just his food. Pick his brain if you see 'em--you won't be disappointed in what you come to discover.

To learn more about Fishtown and other local spots, check here www.stevecaphomes.com