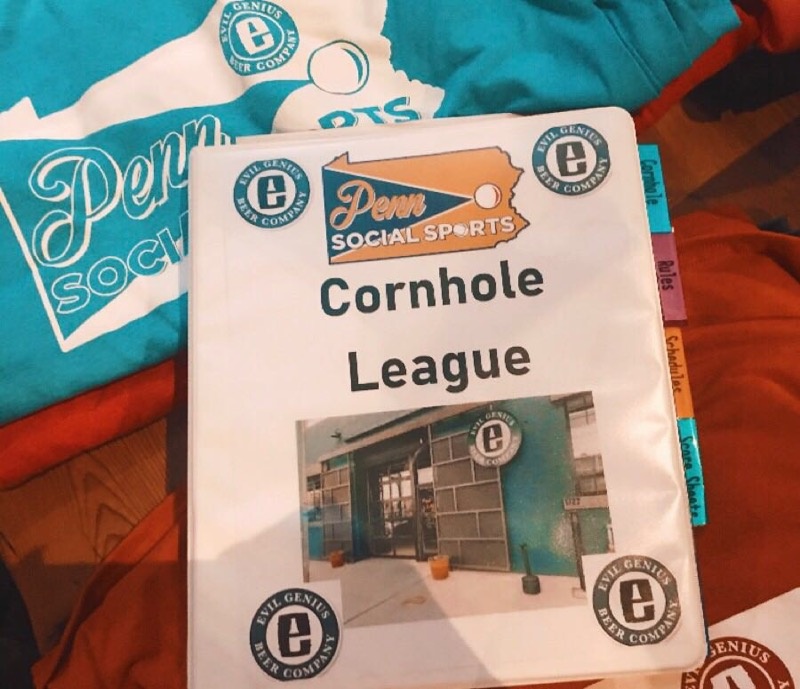 Okay, so if you're like the vast majority of the population, Wednesday nights are typically nothing too crazy. Philly definitely doesn't like to sleep on the days of the week though (I mean, if we're going to be endearingly called New York City's new remote borough, we've gotta take on the position--right?) .

We've got Tuesday Night Hangouts at the Saint on Front and Girard, and we've got Thursday night drag shows at Bob and Barbara's on 15th and South Street, but what's there to do on Wednesday nights? Well, since Spring has officially laced up its Chuck Taylors and has started its sprint to summer, Penn Social Sports and Evil Genius Brewing Company have teamed up (because they love fun, and they love us).

These two entities have decided to make some use of the nicer weather and vibrancy that spring instills in all of us. I'm talking cornhole tournaments, people. With shirts. And wristbands that get you 10% off beer. Oh, and of course a bunch of new friends with nothing else to do on Wednesday nights except get mildly competitive, but mainly just have a good time.

The registration is closed now, but catch me (Nina) there from 7-10pm running the show, along with the rest of the teams' contagious energy, the constant streaming of "the game" (a.k.a. whatever major sports event is live at the moment), some buffalo chicken dip, tacos, pretzels, and... yes, beer.

So come show some support. Take a tour of the brewery. Kick your feet up. Or even take a celebrity round on my team (I've got the pink shirts).

Most importantly, this is a way to get involved in your community and support local business without it being boring or hard. It's interaction and fun at its best. This is what the energy in Philly's all about. The City of Brotherly Love. (And of spunky breweries and weekday events, in my opinion.)

Discover more about Fishtown and all of its great features at www.stevecaphomes.com